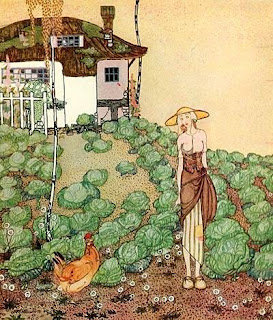 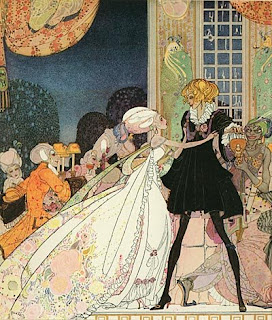 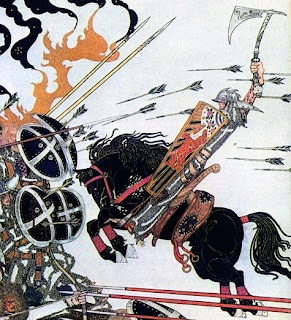 Kay Nielsen (whose first name is pronounced "kigh"), (1886-1957) was a Danish illustrator who was popular in the early 20th century, the "golden age of illustration" which lasted from when Daniel Vierge and other pioneers developed printing technology to the point that drawings and paintings could be reproduced with reasonable facility, He joined the ranks of Arthur Rackham and Edmund Dulac in enjoying the success of the gift books of the early 20th century. This fad lasted until roughly the end of World War II when economic changes made it more difficult to make a profit from elaborately illustrated books.[citation needed]

Born in Copenhagen into an artistic family, his father was director of the Royal Danish Theatre. He studied art in Paris from 1904 to 1911, and then lived in England from about 1911 to 1916. He received his first English commission by Hodder and Staughton to illustrate a collection of fairytales, providing 24 colour plates and more than 15 monotone illustrations - In Powder and Crinoline, Fairy Tales Retold by Sir Arthur Quiller-Couch, 1913. A year later, he also provided 24 colour plates and more than 21 monotone images for the children's collection East of The Sun West of The Moon, old tales from the North, 1914.[1] The colour images for both In Powder and Crinoline and East of the Sun and West of the Moon were reproduced with a 4-colour process - a contrast to many of the illustrations prepared by his contemporaries that characteristically utilised a traditional 3-colour process.

Meanwhile he painted (in tempera) landscapes in the Dover area. Nielsen came into contact with The Society of Tempera Painters where he learned new skills, and was able to reduce the time involved in the process. In 1917 he left for New York where there was an exhibition of his work. Together with a collaborator, Johannes Poulsen, he painted stage scenery for the Royal Danish Theatre in Copenhagen.

Following his theatrical work in Copenhagen, Nielsen returned to contributing to illustrated books with the publication of Fairy Tales by Hans Andersen in 1924. That title included 12 colour plates and more than 40 monotone illustrations - the colour images were prepared with integrated formal and informal borders; the informal borders were produced in a mille fleur-type style. A year later, his superb contribution to Hansel and Gretel: And Other Stories by the Brothers Grimm was first published with 12 colour images and over 20 detailed monotone illustrations. A further 5 years passed before Red Magic - the final title to be illustrated comprehensively by Nielsen - was published: the 1930 version of Red Magic included 8 colour and more than 50 monotone contributions from the Danish artist.

In 1939 he left for California and worked for Hollywood companies.

His art has a very hard edge, which makes them suitable for conversion into cinema cartoon form.

In the 1930s went to work for The Walt Disney Company, where his work was used in the "Ave Maria" and "Night on Bald Mountain" sequences of Fantasia. In 1940 he was laid off. He did some work on "The Little Mermaid" story, but it was almost 50 years before this reached the cinema. His final years were spent in poverty. His last works were for local schools and churches. His reputation has grown steadily since then.