Angel of the North by Antony Gormley 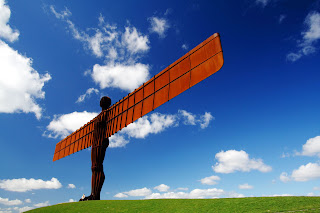 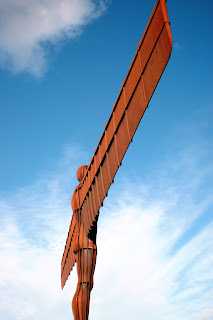 Angel of the North is a modern sculpture designed by Antony Gormley, which is located in Gateshead, England.

As the name suggests, it is a steel sculpture of an angel, standing 66 feet (20 metres) tall, with wings measuring 178 feet (54 metres) across — making it wider than the Statue of Liberty's height. The wings themselves are not planar, but are angled 3.5 degrees forward, which Gormley has said aims to create "a sense of embrace".[1] It stands on a hill, on the southern edge of Low Fell overlooking the A1 road and the A167 road into Tyneside and the East Coast Main Line rail route.

The original maquette, a life-size model from which the sculpture was created, was sold at auction for £2m in July 2008.[2]

Work began on the project in 1994, the total cost coming to £1m. Most of the project funding was provided by the National Lottery.

Due to its exposed location, the sculpture has to withstand winds of over 100 mph (160 km/h). Thus, 600 metric tonnes (661 tons) of concrete were used to create foundations which anchor the sculpture to rock 20 metres (66 ft) below.

The sculpture itself was created offsite, using Corten weather resistant steel, at Hartlepool Steel Fabrications Ltd in three parts – with the body weighing 100 metric tonnes (110 tons), and two wings weighing 50 metric tonnes (55 tons) each – then brought to its site by road. It took seven hours for the body to be transported from its construction site in Hartlepool, up the A19 to the site.

Construction work on the Angel was finished in 16 February 1998. At first, Angel of the North aroused some controversy locally — one local councillor, Martin Callanan, was especially strong in his opposition — and in the UK newspapers. It has now come to be considered by some as a landmark for the North East of England [3][4]and is one of the 12 official 'Icons of England' - albeit not of the United Kingdom.