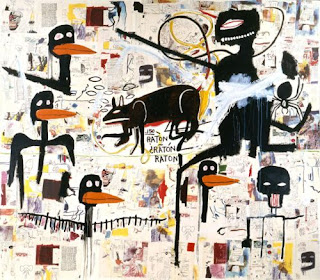 
The canvas is completely covered with colour Xeroxes. The following four Xerox images appear twice. The block of text at top left above the bird's head is repeated at bottom left under the right wing of the lowest bird; the brown box left of the second text can be found again above right of the bird's head we started at; the hollow yellow shape directly above the same bird's head re-appears under the middle bird down on the left side. Finally the image in the top right corner is repeated under the right fist of the figure at bottom right. The figure's mouth is open and might therefore be the tenor singer of the title, although tenor saxophone more naturally springs to mind. Tenor might alternatively refer to the general tone of the painting that is set by the black animal figures. The word RATON that is repeated three times at centre is Spanish for "mouse".