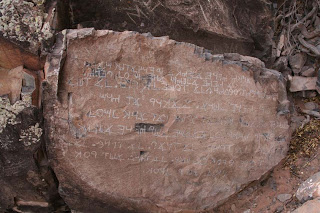 Is this the world's oldest surviving inscription of the Ten Commandments?

There is a fascinating old site some few miles west of a little town called Los Lunas in New Mexico. The site has been known as "Mystery Mountain" by the locals for many years. At the foot of this hill there is an ancient rock inscription. Many scholars now believe that it contains the Ten Commandments, including 3 instances of the Tetragrammaton, inscribed in old Hebrew letters.

However, conventional history teaches that the Americas were discovered by the Europeans either in 1492 by Columbus, or maybe a few hundred years earlier by the Vikings. There still seems to be an aversion among the establishment historians to even consider the idea that ancient Mediterranean peoples from the Middle East might have traveled to the Americas in the centuries before Christ. Only so-called diffusionists (14) would have accepted a different view. And yet, there it is, this inscription in New Mexico, an undeniable witness from an ancient past telling its history ...