The Gateway of the Sun - TIAUANACO SUN GATE 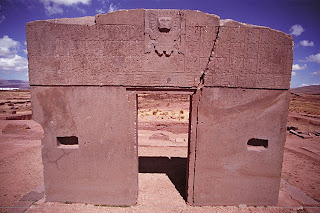 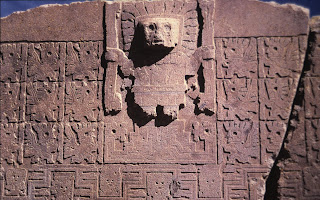 The 10 ton Gateway of the Sun is monolithic, carved from a single block of Andesite granite, and is broken right down the center. Its upper portion is deeply carved with beautiful and intricate designs, including a human figure, condors, toxodons, elephants and some symbols. Directly in the center of the gate is the so-called "Sun-god," Viracocha, with rays shooting from his face in all directions.

He is holding a stylized staff in each hand which may represent thunder and lightning. He is sometimes referred to as the "weeping god" because tears are on his cheeks. The figures flanking the centerpiece are themselves unfinished, leading investigators to wonder what could have interrupted the craftsmen working on the gate that it was left unfinished. This monolith, when first discovered, was broken in half, and was lying askew deep in silt until restored to its proper position in 1908. The Sun Gate now stands in the northwest corner of the Kalasasaya temple.

The famous carved figure on the decorated archway in the ancient (pre-Incan) city of Tiahuanaco, known as the "Gateway of the Sun," most likely represents Viracocha, flanked by 48 winged effigies, 32 with human faces and 16 with condor's heads. This huge monument is hewn from a single block of stone, and some believe that the strange symbols might represent a calendar, the oldest in the world. A huge monolithic figure, facing east in the direction of sunrise, stands as silent witness to an unknown civilization established around 2200 years ago. 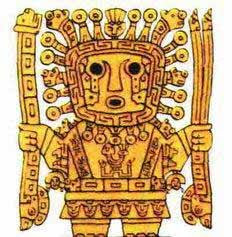 There is a pre-Incan legend that speaks of Viracocha who is depicted in many forms. There is a duality about this deity, which is not unlike gods in other civilizations - the good god and the warrior side to his personality. We see him as he enlightened god in the white robes who brings knowledge and the warrior god with staves in his hands and a sun symbol around his head, not unlike the sun god Ra in ancient Egypt. As we third dimension is a duality - all things have good and evil charactistics - including the gods of all myths. Viracocha - as duality is depicted as the sun god of creation [wearing a sun crown] and the moon god.

Viracocha, as the feathered serpent god, is one of the great mysteries of ancient American cultures. He was called Kukulkan by the Mayas, Quetzalcoatl by the Aztecs, Viracocha by the Incas, Gucumatz in central America, Votan in Palenque and Zamna in Izamal.