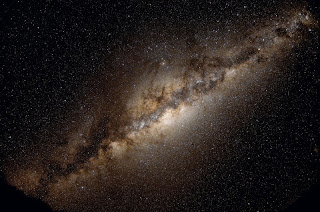 A sugar molecule linked to the origin of life was discovered in a potentially habitable region of our galaxy.


The molecule, called glycolaldehyde, was spotted in a large star-forming area of space around 26,000 light-years from Earth in the less-chaotic outer regions of the Milky Way. This suggests the sugar could be common across the universe, which is good news for extraterrestrial-life seekers.

"This is an important discovery as it is the first time glycolaldehyde, a basic sugar, has been detected towards a star-forming region where planets that could potentially harbor life may exist," Serena Viti of University College London said in a press release.

Previously, glycolaldehyde had only been observed toward the center of the galaxy, where conditions are thought to be too extreme to host habitable planets.

Glycolaldehyde is a key ingredient for life. It helps to build Ribonucleic acid (RNA), which is thought to be the central molecule involved in the origin of life on Earth. Glycolaldehyde is a monosaccharide sugar, the basic unit of carbohydrates. It can react with the chemical propenal to form ribose, the building block of RNA.

"The discovery of an organic sugar molecule in a star forming region of space is very exciting and will provide incredibly useful information in our search for alien life,” said Keith Mason, chief executive of the England’s Science and Technology Facilities Council.

The finding, made with the IRAM radio telescope in France, was announced Tuesday and will be published in the Astrophysical Journal Letters.

See Also:Biologists on the Verge of Creating New Form of Life

Space Sugar's a Sweet Find
When people take a sabbatical, they often joke that they are going to ponder the meaning of life. In 1998, Jan M. Hollis, a senior scientist in NASA Goddard Space Flight Center's Computational and Information Sciences and Technology Office, chose a different focus for his sabbatical. He decided to study the molecular origin of life in the universe. "There are some researchers, like those in the SETI effort, who hope that E.T. phones home," Hollis says. "What I am doing is investigating whether the conditions for the molecular origins of life as we know it exist in space." His recent discoveries have provided new clues to this age-old mystery and offer support for an alternate theory about how life began on our planet. Scientists generally hypothesize that life must have begun with the evolution of simple molecules into the more complex molecules such as sugars, amino acids, and other "pre-life" molecules that are regarded as life's molecular building blocks – the so-called biomolecules. Hollis, an astrophysicist, decided to conduct a search in space for these key molecules that are necessary for the origin of life. He concluded that the most likely class of molecules to search for in our galaxy would be simple sugars in the giant molecular clouds from which stars and planets form. Because sugars are associated with both metabolism and the genetic code, two of the most basic aspects of life, Hollis rationalized the discovery of any sugar in space would increase the likelihood that life may exist elsewhere in our galaxy.

Hollis chose for the search the simplest sugar, glycolaldehyde. A molecule comprised of two carbon, two oxygen, and four hydrogen atoms, it is an important component that can react to form more complex sugars such as ribose. Ribose is a building block of nucleic acids such as RNA and DNA – the carriers of the genetic code in living organisms.

Hollis formed an observing team, requested time on a radio telescope, and waited for more than a year before the experiment was finally scheduled. In 2000 the research efforts of Hollis' team were rewarded. In the star-forming region near the center of our galaxy they found glycolaldehyde – the first evidence of an interstellar sugar molecule.

Molecules rotate end-for-end, and as they change from one rotational energy state to another, they emit radio waves at precise frequencies. The "family" of radio frequencies emitted by a molecule forms a unique set of "fingerprints" that scientists can use to identify that particular molecule. Hollis' team detected glycolaldehyde by observing faint radio emissions from a large ensemble of the molecules in the interstellar cloud. However, while glycolaldehyde was identified, there was no information in the original experiment regarding where and how much of the molecule was found in the gaseous cloud. In 2001 Hollis and collaborators conducted a second experiment using a multiple radio telescope system, called an interferometer, which permits spatial imaging of molecular emission. The interferometer experiment showed that, unlike most other large interstellar molecules, glycolaldehyde is not confined to the hot core of the gaseous interstellar cloud. In fact, during the second experiment the team found glycolaldehyde in an area where temperatures were only 8 degrees Kelvin above absolute zero (which translates to minus 445 degrees Farenheit!) All molecular motion stops at absolute zero. Moreover, they found evidence that these molecules are very widespread.

Hollis and collaborators again probed the same interstellar cloud in 2002 and discovered the sugar alcohol of glycolaldehyde known as ethylene glycol, the primary ingredient of automobile antifreeze. The importance of finding two sugar-related molecular species together indicates that the synthesis of more complex sugars is likely occurring in interstellar clouds. Hollis and his team further discovered in 2003 that the source containing these interstellar sugar-related molecules is centered on a star-forming region that contains enough mass to make approximately 2,600 new stars as massive as our Sun.

Such large molecules are first produced on surfaces of dust grains when an interstellar cloud of gas and dust experiences a shock wave. This can easily happen during the collapse phase of star formation when material collides. The dust grains are typically about a micrometer in size and are coated with a variety of ices that contain simple molecules. The resulting shock of the colliding material provides the energy required to produce glycolaldehyde from simpler molecular species that reside on the grains. In turn, the ethylene glycol is produced from the glycolaldehyde when two hydrogen atoms successively react with a glycolaldehyde molecule. The shock also serves to free molecules from the dust grains, distributing glycolaldehyde and ethylene glycol into the gas on a widespread spatial scale. After the shock wave passes, the glycolaldehyde and ethylene glycol that have been released into the gas phase rapidly cools, forming the so-called post-shock gas.

Sugar formation, as with much of the complex molecular chemistry in space, occurs in the solid phase on or in a variety of ices that coat interstellar grains. Most land-based chemistry occurs in the liquid phase, primarily with water, thus the widely accepted theory that life on Earth began in a "primordial soup." While these two chemistry scenarios are very different, the end results can be very similar. The possibility of early impacts from comets bringing both the water supply and the sugars and other compounds that are life's building blocks to the Earth's surface has been a scientific theory for years. Once those sugars were free from their interstellar freezer and were steeped in the Earth's warm waters, they could have easily combined with other carbon compounds and eventually formed RNA and DNA.

"One thing is clear – a lot of prebiotic chemistry occurs in an interstellar cloud long before that cloud collapses to form a new solar system with a central star and orbiting planets and comets," Hollis says. "This suggests that the molecular building blocks necessary for life to arise on a newly formed planet get a head start in interstellar clouds." Planetary formation is such a hot process that biomolecules would be destroyed in the process. However, comets are formed in a much colder process within the same interstellar cloud, and are frequent space visitors that can supply fresh molecules to a new planet that has finally cooled down. Supporting the notion of complementary theories for the molecular origins of life, Hollis maintains, "Many of the interstellar molecules discovered to date are the same species detected in laboratory experiments specifically designed to synthesize prebiotic molecules. This fact suggests a universal prebiotic chemistry."

Whether the sugars formed here on Earth or in an interstellar frozen nursery, one thing is certain: this discovery was an important one in trying to trace the origin of life on Earth. So much so that Discover Magazine named it one of the 100 most important discoveries in 2004, number 26 to be exact.