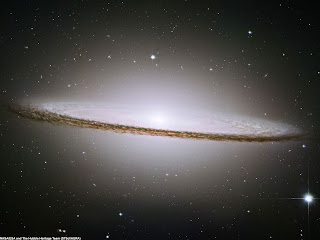 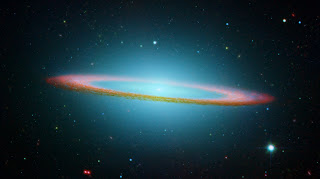 The Sombrero Galaxy (also known as M104 or NGC 4594) is an unbarred spiral galaxy in the constellation Virgo. It has a bright nucleus, an unusually large central bulge, and a prominent dust lane in its inclined disk. The dark dust lane and the bulge give this galaxy the appearance of a sombrero. The galaxy has an apparent magnitude of 9.0, making it a galaxy that can easily be seen with amateur telescopes. The large bulge, the central supermassive black hole, and the dust lane all attract the attention of professional astronomers.

As noted above, this galaxy's most striking feature is the dust lane that crosses in front of the bulge of the galaxy. This dust lane is actually a symmetric ring that encloses the bulge of the galaxy.[5] Most of the cold atomic hydrogen gas[6] and the dust[5] lies within this ring. The ring might also contain most of the Sombrero Galaxy's cold molecular gas,[5] although this is an inference based on observations with low resolution and weak detections.[7][8] Additional observations are needed to confirm that the Sombrero galaxy's molecular gas is constrained to the ring. Based on infrared spectroscopy, the dust ring is the primary site of star formation within this galaxy.[5]

The nucleus of the Sombrero galaxy is classified as a low ionization nuclear emission region (LINER).[9] These are nuclear regions where ionized gas is present, but the ions are only weakly ionized (i.e. the atoms are missing relatively few electrons). The source of energy for ionizing the gas in LINERs has been debated extensively. Some LINER nuclei may be powered by hot, young stars found in star formation regions, whereas other LINER nuclei may be powered by active galactic nuclei (highly energetic regions that contain supermassive black holes). Infraredspectroscopy observations have demonstrated that the nucleus of the Sombrero Galaxy is probably devoid of any significant star formation activity. However, a supermassive black hole has been identified in the nucleus (as discussed in the subsection below), so this active galactic nucleus is probably the energy source that weakly ionizes the gas in the Sombrero Galaxy.[5]

In the 1990s, a research group led by John Kormendy demonstrated that a supermassive black hole is present within the Sombrero Galaxy.[10] Using spectroscopy data from both the CFHTHubble Space Telescope, the group showed that the speed of rotation of the stars within the center of the galaxy could not be maintained unless a mass 1 billion times the mass of the Sun, or 109M☉, is present in the center.[10] This is among the most massive black holes measured in any nearby galaxies. and the