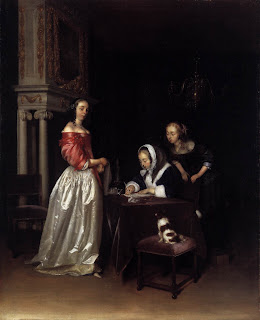 
Although ter Borch worked in Deventer, well to the east of Holland's main artistic centers, he painted some of the most sophisticated genre scenes of his time. In this canvas of about 1660, the costumes and interior decoration represent the height of patrician taste. The anecdotal title dates from the eighteenth century. Lady at Her Toilet in the Detroit Institute of Arts was possibly painted as a pendant to the present picture.

Send this picture as postcard

Friendly format for printing and bookmarking

Terborch painted a significant number of letter readers and writers. Depictions of this sort enjoyed immense popularity during this period. Since letter writing was primarily (though not exclusively) a leisure activity among the well-to-do it is not surprising that paintings of this theme were so prevalent during the decades in which the Dutch economy expanded greatly.

The Curiosity, completed around 1660, features three young women in an ornate interior. One sporting an ermine-trimmed jacket attentively writes a letter as another woman, identifiable as a maid because of her comparatively simple attire, peers inquisitively over her shoulder. To their right stands a young lady of extraordinary beauty and bearing. Her station and propriety are connoted not only by her luxurious garments but also by her long handkerchief. This accouterment functioned chiefly as a fashionable status symbol for upper-class women in the Dutch Republic.