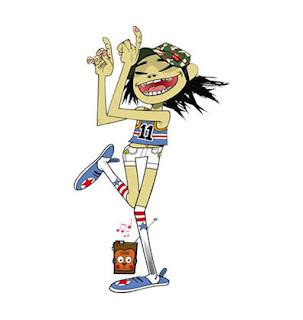 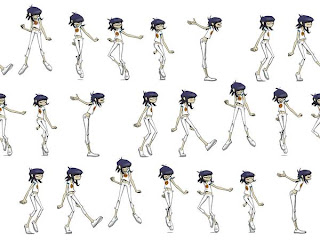 At age 10, Noodle arrived on the Gorillaz' doorstep in a FedExNME. She could not speak any English beyond the word "Noodle", thus earning her the alias. She quickly got settled in England with the Gorillaz, and was accepted as the fourth member of the band. crate, in response to the ad they placed for a guitarist in the

In Rise of the Ogre, it is revealed that during the band's hiatus in November, 2003, Noodle went back to Japan to find out the truth about her past after being haunted by strange nightmares while on tour. Upon her return to Japan, Noodle regained her memory after hearing the code-phrase 'ocean bacon' at a restaurant. There she coincidentally met with her creator/mentor, Mr. Kyuzo, who was working as the head chef in the restaurant, and who explained the memories she had regained. It turned out that she was one of the test subjects in a secret government super soldier project, but she was trained specially as a musician. As a result, she is a master of many weapons, languages, and musical instruments, but her specialty is the guitar, both as a musical instrument, and an instrument of destruction. Out of the 23 children created for the project, Noodle was the only one to survive; the others were all destroyed by the government. Mr. Kyuzo had smuggled her to safety in England after reading the aforementioned ad placed by the other three Gorillaz members in the NME; he had specifically chosen the Gorillaz because he was aware of the usual international success of English bands and he believed that Noodle could enjoy success in relative obscurity. The other two code-words (one to erase her memory and the other to turn her into a frenzied killing machine) are known only to Noodle and, presumably, Mr. Kyuzo, though Murdoc has a very keen interest in finding out what they are.

Noodle regained the ability to speak English, along with her memories, and was the first member of Gorillaz to return to Kong Studios. She was alone at Kong studios for nearly six months, during that time she was composing the majority of the Demon Days album. Her composition of the album crafted a specific message, which would explain the more 'crafted' sound to that album, as opposed to the debut which was composed by Murdoc and 2D, which had a grimier, more spontaneous sound. She is probably the least vocal of the band, but became the most vocal of the band when it came to describing the album, its themes, and what it means.