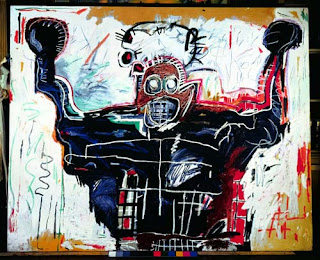 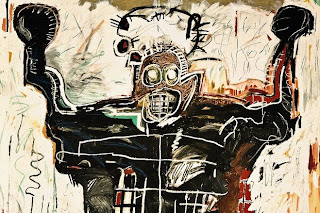 Painted in 1982 when he was only 22, Basquiat’s “Untitled (Boxer)” epitomizes an idea that held great sway over the artist: that a champion could triumph over social and racial prejudices and establish himself as a hero. Seeing himself — a Brooklyn native of Haitian and Puerto Rican heritage — as an outsider to the mainstream art world, Basquiat was inspired by Joe Louis, Sugar Ray Leonard, and the other pugilists who literally fought their way to success. Additionally, as a dedicated student of their lives and the barriers each had to overcome, the young artist frequently incorporated his heroes’ victorious — yet still complex and vulnerable — message into his paintings. Currently in the collection of Metallica drummer Lars Ulrich, this particular acrylic and oil paintstick on linen lot was acquired by the rocker (and Basquiat fan) in 1999 in Vienna and will be auctioned off at Christie’s Post-War and Contemporary Art auction Nov. 12 - 13.

NEW YORK (AP) — A painting by Jean-Michel Basquiat has been sold for $13.5 million at an auction in New York City.

The painting shows a black heavyweight fighter with his arms thrust in the air against a white graffiti-filled background. It surpassed its pre-auction estimate of more than $12 million.

The current auction record for a Basquiat is $14.6 million for "Untitled," which sold at Sotheby's last year.

Francis Bacon's "Study for Self-Portrait" didn't sell. Christie's says it had been estimated to sell for about $40 million.

(This version CORRECTS that Basquiat was consigned by Ulrich for sale NOT purchased by him; corrects price to $13.5 million from $14M; corrects overlines.)