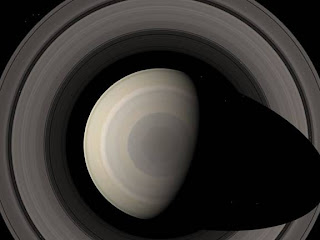 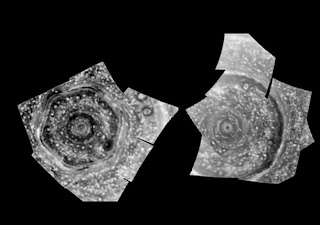 The Cassini mission has released some of the most detailed images of Saturn's poles yet, revealing vast cyclones churning up the gas giant's atmosphere in the north and south. These observations show very similar storms to the south pole observations imaged by the NASA spacecraft in 2006, only in far better detail. It is believed the north and south cyclones are generated by violent thunderstorms deep inside Saturn's atmosphere; water condensing inside these storms output heat, fuelling the vortex extending 2,500 miles (4,000 kilometres) in diameter. The smallest features resolved are 120 kilometre (75 mile)-wide cumulus clouds rotating at velocities in excess of 325 mph (530 kph), more than twice the wind speed possible on Earth…

…and the mystery north pole hexagon is still there.

Cassini has wowed scientists with these brand new views of Saturn's north pole. With detail at 10-times higher resolution than previously attained, Cassini has shown that both poles have vast swirling cyclones that highlight regions of planet-wide storm activity.

"These are truly massive cyclones, hundreds of times stronger than the most giant hurricanes on Earth," said Kevin Baines, Cassini scientist on the visual and infrared mapping spectrometer at NASA's Jet Propulsion Laboratory. "Dozens of puffy, convectively formed cumulus clouds swirl around both poles, betraying the presence of giant thunderstorms lurking beneath. Thunderstorms are the likely engine for these giant weather systems."

Interestingly, the northern storm observation still shows the mysterious hexagonal shape (as originally verified in 2006, after a sighting by Voyager 1 in 1980), only in far greater detail. Scientists are still uncertain why the northern cyclone should take such a stable form; the clouds within the hexagonal shape spin at high speeds without interfering with its six-sided shape. 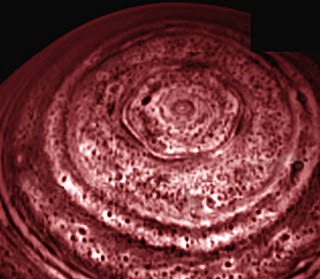 Excellent post, I agree with you 100%! I’m always scouring the Internet for new information and learning whatever I can, and in doing so I sometimes leave comments on blogs. I don’t do it for SEO purposes necessarily, but to learn new things.

must say that overall I am really impressed with this blog. It is easy to see that you are passionate about your writing. If only I had your writing ability I look forward to more updates and will be returning.

This is a nice and informative, containing all information and also has a great impact on the new technology. Thanks for sharing it

nice article sir
thanks for information ..

oh my god, how long did you find the idea for this article ? what a very nice articleman...
agen judi online & live casino online