The Amero - Currency of the North American Union 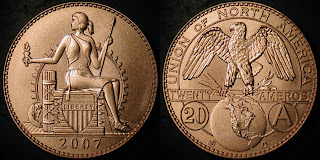 The North American currency union is a controversial proposal in which the three principal countries of North America, namely Canada, the United States and Mexico, would share a common currency. Implementation would probably involve the three countries giving up current currency units (Canadian dollar, US dollar and Mexican peso) and adopting a new one, created specifically for this purpose. The hypothetical currency for the union is sometimes referred to as the amero. The concept is modeled on the common European Union currency (the euro) and it is argued to be a natural extension of NAFTA. Conspiracy theorists contend that the governments of the US, Canada, and Mexico are already taking steps to implement such a currency.

The idea for a North American currency union was first proposed in 1999 by Canadian economist Herbert G. Grubel. A senior fellow of the Fraser Institute think-tank, he published a book entitled The Case for the Amero in September 1999, the year that the euro became a virtual currency. Another Canadian think-tank, the conservative C.D. Howe Institute, advocates the creation of a shared currency between Canada and the United States.

After the report came out, centre-left nationalist groups in Canada expressed their opposition to any currency union because they view it as an attempt by American businesses to gain access to Canada's extensive natural resources while dismantling the nation's social services. The 100,000 member strong Council of Canadians, a progressive advocacy group, has declared one of its central issues to be the threat of "deep integration."

The idea envisioned a currency union of the amero would mix the two dollars, and the peso, or it could also simply be dollarization of the American currency. 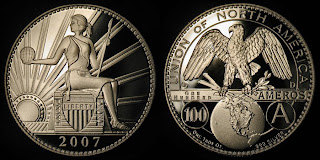 Some assert that having a single North American currency would be unconstitutional under the current U.S. constitution under Article 1, Section 8; which states that the United States Congress has the right to “coin money, regulate the value thereof, and of foreign coin, and fix the standard of weights and measures;”.

This concern rests on the contention that the Federal Reserve, created in 1913, is unconstitutionally issuing and regulating American currency as it is a quasi-government entity and not part of the legislative branch of the United States government. While physical U.S. Dollars are issued by the Department of the Treasury (in paper form by the Bureau of Engraving and Printing, in coin form by the U.S. Mint), most dollars in existence are not in physical form, and the value of the dollar is largely controlled by the actions of the Federal Reserve in lending and purchasing government securities.