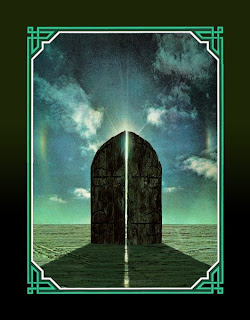 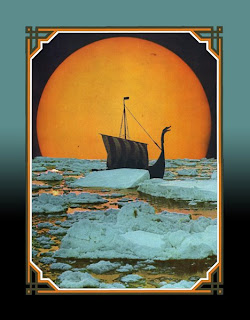 California based artist Geoff Kern prefers cabin fever and loud heavy metal music to the limitations of art school. The self-called "mountain-man" has become indispensable by creating stunning paintings and collages of mystical scenes depicting archetypal imagery. He incorporates complex pencil drawings, old periodicals and watercolors into conceptual mandalas and cosmic, psychedelic landscapes. "I think there are good ways of describing medieval fantasy in basic iconic form. Not necessarily Barbarians hammering it out, but in the idea of "the quest". I'm refering to the broad genre referencing imaginary worlds based on pre-medieval and medieval Europe." His series of four images is loosely based on the idea of the quest-traveling through different landscapes and describing that epic moment when this strong, archetypal event occurs. "When the night rainbow leads into the cave at the top of the mountain, or when the secret portal is opened in the midst of an empty wasteland as in "Gateway To Valhalla" (which is typically a place only entered into by dying in battle), this is like some secret doorway into the afterlife. "Forest Encounter" involves the meeting with a forest goddess, ruling over the waters of the night, holding a sword with a crescent moon. "Viking Sunset", which represents travelling to the end of the earth, out of the setting sun, coming from the past." Besides taking inspiration for his Viking imagery and arctic landscapes from the Icelandic Eddas, his work is apparently influenced by one of the most emulated fantasy and science fiction artists in the world, Frank Frazetta (whose "The Sea Witch" painting was recently used by Wolfmother as the cover for their self-titled debut), Geoff indulged himself in the dakini tarot-design of his idol. "He is, in my opinion, straight-forward, well-done fantasy art from that period. The Dakini for example has these tripper collages involving stellar photography and ancient Dakini symbolism. It's what got me into that collage style. The borders I used for my posters are similar to those of 70's and 80's medieval fantasy covers." The border frames it, gives it a type of window to look through that presents the idea of a quest, a journey, a window into this other world. Kern´s "Cosmic Landscapes" painting references this other-wordly quality, and notes the astrological vibe associated with this dimension of the supernatural. Also, the writer Joseph Campbell has solidified the idea of archetypes and the quest, in particular "The Hero with a Thousand Faces". Geoff´s past works have included ancient ceremonial jewelry prints that were featured on a limited run of LA's Cerre t-shirts. Most of the images are graphit drawings, but he also designed a wall mural as well as some skateboard art. Finally, Geoff will be featuring his recent works at his premier solo exhibition "Talisman" at BBlessing, NY. 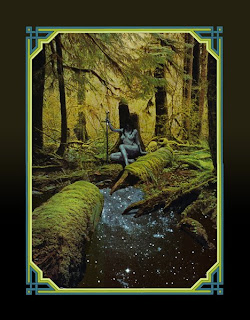 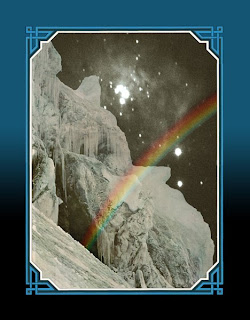