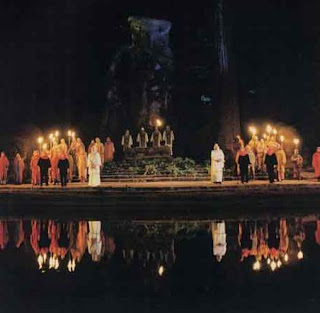 The Cremation of Care ceremony was devised in 1893 by a member named Joseph D. Redding, a lawyer from New York.[9] It was originally scheduled to follow the serious "High Jinks" dramatic performance (later known as the Grove Play) on the first weekend of the summer encampment, and served as a catharsis for pent-up high spirits. In 1913, the ceremony was separated from the Grove Play and moved to the first night to become "an exorcising of the Demon to ensure the success of the ensuing two weeks". The Grove Play was moved to the last weekend of the encampment.[10]

The ceremony involves the poling of a small boat across a lake containing an effigy of Care (called "Dull Care"). Dark, hooded figures receive from the ferryman the effigy which is placed on an altar and at the end of the ceremony, is set on fire. This "cremation" symbolizes that members are banishing the "dull cares" of conscience.[2]

The ceremony takes place in front of a 45-foot (14 m) high hollow owl statue made of concrete over expanded metal framing and steel supports. The moss- and lichen-covered statue simulates a natural rock formation, yet holds electrical and audio equipment within it. During the ceremony, a recording of the voice of Walter Cronkite, a member of the Bohemian Club, is used as the voice of The Owl. Music and pyrotechnics accompany the ritual for dramatic effect.