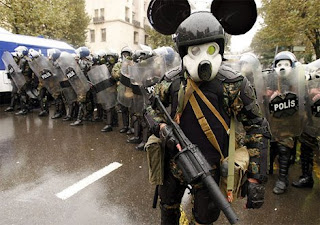 The verdict in the southern city of Katowice ended a two-year trial, Poland's second attempt to convict the officers for their role in the most deadly incident of bloodshed during the 18-month crackdown.

It was another setback in a decade-long ...

Polish riot police used batons to break up a protest by nurses in Warsaw on Wednesday, escalating an already bitter stand-off between the conservative government and health workers demanding better pay. charged with gunning down striking miners during the old communist regime's 1981 martial-law crackdown on the Solidarity movement.

Hundreds of hospitals have been affected by strikes for six weeks. Strikers are also calling for reform of the creaking state health service and threaten to join the exodus of Polish workers to Western Europe if their demands are not met. Police forced several dozen protesters, mostly women, off a street in front of Prime Minister Jaroslaw Kaczynski's office, where they had camped in tents overnight. A police spokesman said minimum force was used to clear the illegal protest.

"They treated us like hooligans in a stadium," said Izabella Szczepaniak, president of the Association of Nurses and Midwives. "They pressed us against the barriers so hard we could hardly breathe ... police should not treat health workers like criminals."

Protest leaders said several nurses had been roughed up.

On Tuesday, several thousand doctors and nurses marched through Warsaw, waving signs reading: "Protest of white slaves" and "We want a decent wage".

The prime minister, who met union representatives on Tuesday, has offered pay rises of 15 percent per year over the coming three years, but protesters say wages were low to start with and those for other professions are rising faster.

A wave of young Poles heading west since Poland joined the European Union in 2004 has already created bottlenecks in other professions and that could easily spill over to healthcare. Polish doctors and nurses earn salaries way below counterparts in Western Europe.

Kaczynski has said he is ready to negotiate but would not deviate from "economic realities". Polish wages rose almost 9 percent year-on-year in May, raising expectations that interest rates would go up again soon.

Opposition leaders said parliament should investigate the police action against the protesters.

"Sending police at nurses is not the way to solve this conflict," said Donald Tusk, comparing it with the way armed riot police dealt with protestors under the communist regime.

Fail it's Georgian police not Polish.