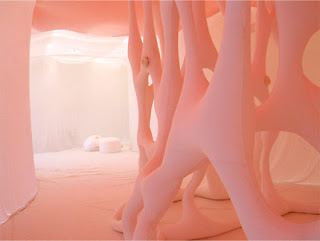 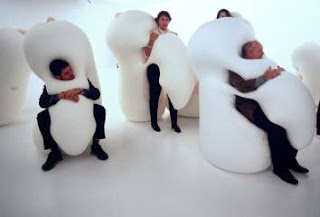 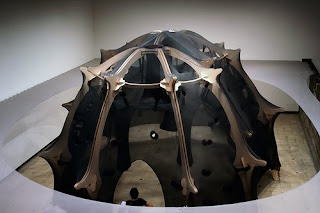 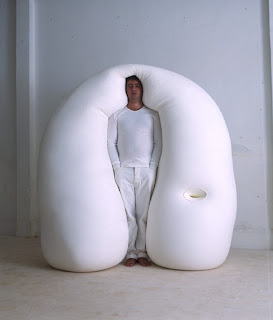 ernesto neto is considered one of the absolute
leaders of brazil’s contemporary art scene.
his inspiration comes partly from brazilian
neo-concretism. at the end of the 1950s and
beginning of the 60s the movement’s best-known
proponents, lygia clarc and hélio oiticica,
rejected modernism’s ideas of autonomous
geometric abstraction. instead, they wanted to
equate art with living organisms in a kind of
organic architecture, and invite the viewer to be
an active participant.

ernesto neto works with abstract installations
which often take up the entire exhibition space.
his materials are gossamer-thin, light,
stretchable fabrics in nylon or cotton. like fine
membranes fixed to the ceiling by long,
stretched threads his works hang down into
the room and create shapes that are almost
organic. sometimes they are filled with scented
spices and hang in tear-shaped forms like
gigantic mushrooms or huge stockings,
sometimes he creates peculiar soft sculptures
which the visitor is allowed to feel through
small openings in the surface. he also creates
spatial labyrinths which the visitor can enter
and thereby experience the work and interact
with it.

neto’s art is an experience which creates
associations with the body and with something
organic. he describes his works as an
exploration and a representation of the body’s
landscape from within. it is important to neto
that the viewer should actively interact with
and physically experience his work by feeling,
smelling, and touching it.

for malmö konsthall neto will create a
completely new work which he is calling
'the malmö experience'. the exhibition in
malmö will provide an overview and synopsis
of neto’s previous works and contain a number
of important works which will be presented in
a new way. in a huge 'organic labyrinth' of
fabrics and shapes, which takes up the entire
exhibition space, the visitor can experience
the work from both inside and outside.
the exhibition is based on the colours of the
rainbow and the body labyrinth/organism
consists of a number of smaller spaces which
together constitute the whole. 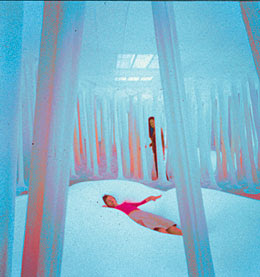 Ernesto Neto began exhibiting in Brazil in 1988 and has had solo exhibitions abroad since 1995. He represented with Vik Muniz their country in 2001 Venice Biennale, his installations were featured in Brazil's national pavilion and in the international group exhibition at the Arsenale.

Neto's work has been described as "beyond abstract minimalism". His installations are large, soft, biomorphic sculptures that fill an exhibition space with viewrs can touch, poke, and even sometimes walk on or through. These are made of white, stretchy, stockinglike material, which he stuffs- to fill out and solidify the amorphous forms- with Styrofoam pellets or, occasionally, aromatic spices: in some installations, he has also used this material to create translucent scrims that transform the space's walls and floor. His sculptures can be regarded as expression of traditional abstract form, but in their interaction with the viewer they work on another level as well.

One of his most acclaimed installation is the one at the Panthéon in Paris called Léviathan Thot.