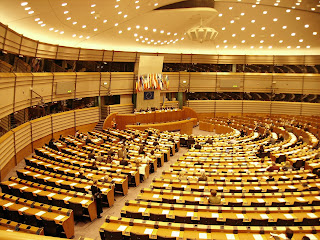 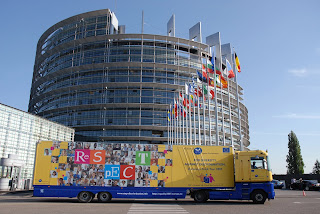 The European Parliament (Europarl or EP) is the only directly elected parliamentaryEuropean Union (EU). Together with the Council of the European Union (the Council), it forms the bicameral legislative branch of the Union's institutions and has been described as one of the most powerful legislatures in the world.[1] The Parliament and Council form the highest legislative body within the Union. However their powers as such are limited to the competencies conferred upon the European Community by member states. Hence the institution has little control over policy areas held by the states and within the other two of the three pillars of the European Union. The Parliament is composed of 785 MEPs (Member of the European Parliament), who serve the second largest democratic electorate in the world (after India) and the largest trans-national democratic electorate in the world (342 million eligible voters in 2004).[2][3][4] institution of the

It has been directly elected every five years by universal suffrage since 1979. Although the European Parliament has legislative power that such bodies as those above do not possess, it does not have legislative initiative, as most national EU parliaments do,[5] but it does in a de facto capacity (see Powers and functions] below)[6]. While it is the "first institution" of the European Union (mentioned first in the treaties, having ceremonial precedence over all authority at European level[7]), the Council has greater powers over legislation than the Parliament where codecision procedure (equal rights of amendment and rejection) does not apply. It has, however, had control over the EU budget since the 1970s and has a veto over the appointment of the European Commission.[5]

The European Parliament has two meeting places, namely the Louise Weiss building in Strasbourg, France, which serves for twelve four-day plenary sessions per year and is the official seat, and the Espace Léopold complex in Brussels, Belgium, the larger of the two, which serves for committee meetings, political groups and complementary plenary sessions. The cost of having all MEPs and their staff moving several times a year from one place to another is of concern to some. The Secretariat of the European Parliament, the Parliament's administrative body, is based in Luxembourg.[8][9] 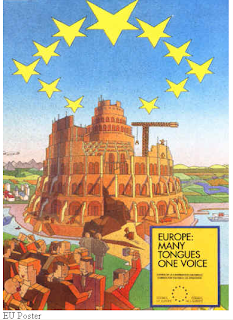 The European parliament building in Strasbourg, France, is “an enormous replica of the unfinished tower of Babel,” called the “The Tower of Eurobabel” by the European press, Dr. David R. Reagan, wrote in the Dallas-based Lamplighter Magazine.

An EU poster shows the people of Europe rebuilding the Tower of Babel. The text on the poster says, “Europe: Many Tongues – One Voice.” The stars on the poster are inverted into pentagrams, a recognized occult sign.