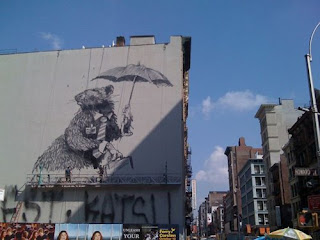 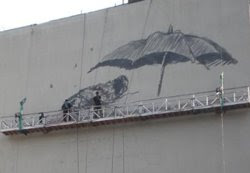 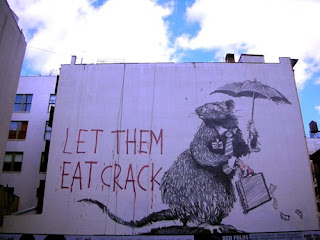 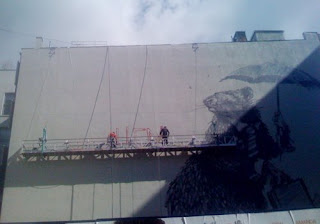 The Colossal Media painted Banksy ad featuring a massive rat with an umbrella on Howard and Broadway will soon read "Let Them Eat Crack." An eagle-eyed street scout noticed the traced out letters and snapped this photo of the work currently in progress. Well that's certainly one way to promote your new gallery Mr. Lazarides. UPDATE: Completed ad below.


Although many successful gallery artists do employ assistants to execute their ideas or concepts, Banksy is not generally one to relegate work to others, except when it comes to NYC. In what must be a huge disappointment for street art fans, the infamous stenciler's imagery has been popping around the city up but he didn't paint any of them himself, instead relying on outdoor advertising company Colossal Media. Now that's just weak. At least Nick Walker painted his own shit while in the city this past summer even if it was all legal walls. UPDATE: Jump for the almost completed rodent. |Gawker|